Dramatic dashcam footage shows a citizen coming to the aid of officers who were under attack by a violent thug. The suspect was kicking the officer and dragging him around, but a nearby citizen was having none of it.

“It started with this man and another suspect using cloned credit cards to buy gift cards in a grocery store,” Jennifer Wagnon of the Edmond Police Department in Oklahoma told ABC News. The clerk at the grocery store recognized the suspects as people who had been going around to local stores, doing the same thing. The clerk told them that she needed to get her supervisor to approve the transaction and then the suspects ran away.

A responding officer saw their vehicle and attempted to stop it. The vehicle pulled into a local strip mall, and one of the suspects started fighting the officer. The suspect’s partner then took off in the vehicle during the fight.

In the middle of this brutal assault, you can see a heroic bystander jump in to help. He helped tackle the suspect and take him into custody.

We live in a time where more people than ever seem to hate the police and are willing to attack us. This heroic citizen did something that many don’t have the bravery to do, and he rushed into a fight to help a police officer who was being brutally attacked by a violent criminal.

What would you do if you saw an officer who was in need of help? Let us know on our Facebook page. 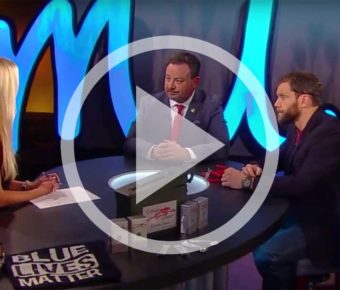