UPDATING LATEST: Protesters Have Shut Down I-94 – Confronting Police

Philando Castile protesters have taken over I-94 in St. Paul.

St Paul, MN – A large group of thousands of protesters, some with children, have shut down I-94 Friday night. The protests are in response to the Philando Castile shooting verdict in which a multi-racial jury acquitted Officer Jeronimo Yanez.

At least one car has driven through the blockade. Unconfirmed reports state the the driver was shouting racist slurs and “make America white again.”

The crowd has been walking down the interstate chanting “Fuck 12.”

The group of protesters are about to come head-to-head with police in riot gear, at which time they will either be herded in a safe direction or have a confrontation with police. The march organizers have stopped the march in preparation for the confrontation.

Many of the protesters are putting on gas masks and other face coverings.

There has been some minor vandalism but no violence as of the time of this writing.

UPDATE: Police are telling the thousands of protesters that it’s an “an unlawful assembly, subject to further action.” The crowd seems ready for a fight.

UPDATE: A KSTP helicopter crew is reporting that the crowd has thinned from thousands to around 500 protesters who look ready to stay.

UPDATE: Despite the gas masks and big talk, almost all of the crowd moved off of the interstate. A handful of protesters decided to stay and were arrested. Thankfully, the protest remained peaceful. The remaining protesters moved off of the interstate and gathered on a side road. Law enforcement issued another dispersal order and the crowd is moving on. One Day Later: What We Know About Esteban Santiago’s Suspected Terrorist Attack At Fort Lauderdale 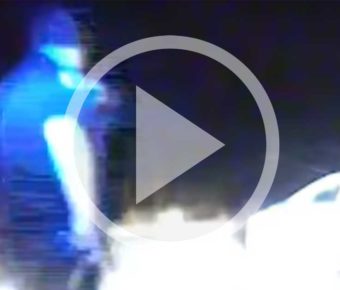