Thomas Lifson on American Thinker pointed out the recent tweet which reads, “All I Want for Christmas is White Genocide.”

This recent tweet follows other tweets by George Ciccariello-Maher in which he declares support for Black Lives Matter, identifies himself as a communist, and a variety of otherwise offensive tweets.

Ciccariello-Maher, who is white, has responded that his tweets were “satire,” and that “white genocide” was referring to the conspiracy theory of whites being eliminated by means of non-whites making too many babies with whites. The professor appears to claim not to understand how the words “white genocide” could possibly be taken literally.

Ciccariello-Maher’s Twitter account is now set to private, but before locking it down, he tweeted to clarify any misunderstanding: “To clarify: when the whites were massacred during the Haitian Revolution, that was a good thing indeed.”

Just so nobody misunderstands George Ciccariello-Maher.

When you are going to claim that your “white genocide” tweet was based on “satire” mocking a racist conspiracy theory, referring to an actual mass-killing of whites is probably not going to make you believable. It seems likely that Ciccariello-Maher doesn’t know the difference between satire and internet trolling.

Dexel University has since responded to the tweets, saying, “While the University recognizes the right of its faculty to freely express their thoughts and opinions in public debate, Professor Ciccariello-Maher’s comments are utterly reprehensible, deeply disturbing, and do not in any way reflect the values of the University. The University is taking this situation very seriously. We contacted Ciccariello-Maher today to arrange a meeting to discuss this matter in detail.”

This is coming from the same man who previously Tweeted the following during the Kaepernick debacle:

The liberal media has eaten up George Ciccariello-Maher’s excuse of “satire,” and are calling the Drexel University’s reaction as censorship of anti-racist messages.

What do you think of George Ciccariello-Maher’s excuse? Let us know on our Facebook page or in the comments below. VIDEO: People Protest Police Shooting Of Person Who Was Stabbing Cop, Car Drives Through Them 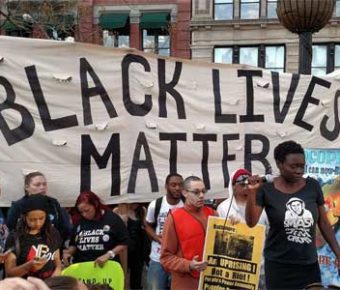