The letter was dated March 15th, and was shared by his mother with Cleveland 19.  The letter was delivered directly to Officer Fahey’s parents, his mother and stepfather Jackie and Mark Ketterer, both retired police officers.  It said:

It is with a heavy heart that I learned of the loss of your son, Officer David Fahey.

Our Nation owes a debt of gratitude to David for his honorable service in the United States Navy and on the Cleveland Police Force.

While no words can possibly console your family at this sorrowful time, I pray that you are strengthened by the memory of David’s enduring spirit and steadfast courage.  He will forever be remembered for his commitment to protecting and serving the American people.

Melania and I join your family, friends, loved ones, and the Cleveland community in honoring David for making the ultimate sacrifice while in the line of duty.”

Officer Fahey’s mother, Jackie, said that “It was awesome to have David honored like that.  It was very personally written. That meant a lot to know it wasn’t just a standard letter,” according to Cleveland.com.  She said that her son was a supporter of President Trump and would have been thrilled about the letter.

Steve Loomis, Cleveland Police Patrolmen’s Association President, said that this was the first time that a United States President had reached out to the surviving family of a deceased Cleveland Police Officer during his 24 years with the agency.  He called the letter “an act of heartfelt kindness that is appreciated by all law enforcement officers and law-abiding citizens everywhere and will never be forgotten.”

Officer David Fahey, age 39, was murdered on January 24, 2017, when he was hit by the speeding vehicle of Israel Alvarez.  Officer Fahey had been directing traffic at a crash on I-90 West, according to Fox 8.

Alvarez has plead not guilty to charges of Aggravated Vehicle Homicide, Driving Under the Influence, Failing to Stop After an Accident and Drug Possession.  He remains in custody at the Cuyahoga County Jail.

Thank you President Trump, for your simple kindness.  In a society where so little is done these days to honor police officers, where so many are quick to judge and hate, and where so many do a thankless job not knowing if they will go home at the end of day, we thank you on behalf of all officers.

We send our continuing thoughts and prayers to the family of fallen hero Cleveland Police Officer David Fahey, both blood and blue.

Do you think that President Trump is setting a new standard for presidents honoring law enforcement officers? We’d like to hear from you. Please let us know in the comments. 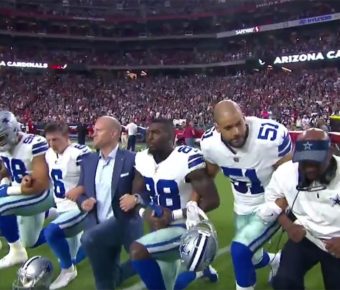